“I want to keep finding ways to embed my work with intent by putting the spotlight on topics and people that challenge the status quo.”

The first time I properly chatted with Kelvin was in Lesotho, when Ryan Sandes and I were spending a week at the top of the Sani Pass doing some altitude training in advance of our TransAlpine Run in 2010. Kelvin joined us for a couple of days to get some photos, before he jetted off to Europe to shoot the same race we were running. I had already seen Kelvin in action during Skyrun the year before, and I knew this man had huge talent – not only was he able to capture fantastic images, but his athletic capabilities enabled him to move from one end of a mountain ridge to the other to get to all the spots and all the action! On the photographic side, Kelvin has carved a name for himself internationally in less than a decade, and has shot for big names across the globe. The man, however, remains the humble, modest, tousle-haired Kelvin we know and love. This is an interview with one of South Africa’s crème de la crème of action photography.

LD: The obvious question to start: have you always wanted to become a photographer? Whip us through your photographic journey – how, when and where did it all start for you?
KT: I’ve always wanted to work outdoors. Growing up in Zimbabwe instilled an appreciation for wild and remote places that still resonates today. I started taking photos when I was at school, but photography remained a hobby for about 15 years after that. I did a natural science degree at uni, thinking this was my ticket to a life exploring far-flung places. But I found the rigours of scientific research slow, and the scope for different subject focus too narrow. I went sailing after studying, and didn’t return home for four years. During this time I picked up my camera again, shooting mainly transatlantic offshore races from onboard. I came home after this stint and took up photography full time, motivated by what storytelling offered when using still- and moving images. I’ve since come to understand that what this offering is a means to learn. I love learning. Being confronted by newness gives me boundless energy, and I can’t imagine a better tool to learn that photography and film.

LD: You’re renowned for your incredible images – you have the ability to capture the raw essence of whatever you’re photographing, no matter what the subject is. Give us some insight into your philosophy behind your photography.
KT: Over the years, as I’ve grown as a person and my circumstances have changed, so my photo philosophy has too. But I do know that it started with – and remains an important part of my photography today – focusing on being a participant rather than an observer. I guess this stemmed from a selfish need to do what my subjects were doing, instead of being stuck on the sidelines. I picked work that would allow me to kayak, swim, bike, climb and run whilst carrying a camera. I learnt some great lessons here, like empathy, and frugality or needing less. Being frugal was not only an excuse not to heave heavy packs around, but was also a way of understanding how knowledge and technique can replace the need for stuff, like multiple cameras and lenses – it’s a lesson that can be applied to most areas of life. Right now though, I’m in the grips of trying to centre my photo philosophy around creating more art. One of my favourite quotes is, “Art is a personal act of courage, something one human does that creates change in another. Under this guise artwork has intent, not just substance.” I want to keep finding ways to embed my work with intent through putting the spotlight on those topics and people that challenge the status quo.

LD: You cover loads of sports, and trail running is by no means the most dramatic of them. Take us through the range of what you’ve shot. What’s the most extreme shoot you’ve done?
KT: Offshore sailing, mountaineering, free solo climbing, white water kayaking… but probably the most extreme is polar swimming. Two years ago I had the opportunity to document ocean advocate and cold water swimmer, Lewis Pugh‘s record-breaking most southerly swim. We were in -1.5°C water at 79° south, just below the towering Ross Ice Shelf in Antarctica, where the air temp was minus 40°C , due mainly to the strong katabatic winds that blow down from the polar ice cap. Added to the frigid conditions, what made swimming here particularly extreme was knowing that the nearest port and significant medical help was a three-week sail away.

LD: There must be a few hair-raising moments in your memory bank. Any cliffhangers or near-misses you can tell us about? Lost/smashed equipment? Extreme weather conditions?
KT: Yes, there are a few. One particular time sticks out, and which good friend and work colleague, Greg Fell, wrote about not so long ago… here is an extract from Greg’s notes:
Ryan Sandes: “I came out of that first foray pretty scared, having realised how far removed we would be from rescue – completely at the mercy of the elements.”
Kelvin Trautman: “Pretty scared? I’m sure you told me that was the most scared you had ever been.”
In 2013, I formed part of the production team for The African Attachment, tasked with documenting Ryan Sandes and Ryno Griesel’s 220km+ Drakensberg Grand Traverse for Red Bull Media House. We had brought Kelvin Trautman on to shoot stills and video for the duo’s first recce. It was the first time I had ever worked with Kelvin, and the assignment would see him having to shoot both mediums by himself, lugging camera gear and slimmed-down safety supplies across some of the highest peaks south of Kilimanjaro, all the while having to keep up with two of the fittest guys in South Africa. Their goal was to complete the entire route. At the time, the brief we gave him seemed fair.
A couple of months ago when Kelvin and I first started talking about this article, he relayed how much more was at stake that night and that maybe “pretty scared” was a bit of an under-statement.
“At about 20h00 on the second day, under a sky full of stars, we set out to climb the last 300m to the summit of Giant’s Castle, a precipitous peak that sits around 3300m. The going was slow and I was tired. Humping camera equipment for what was now 30 straight hours across 160km of rough mountain terrain had taken its toll.
With less than a hundred vertical metres to go before the summit, one of the Drakensberg’s infamous unannounced thunderstorms hit us. It shuddered violently around us but as each flash of lightning illuminated the summit just ahead, we decided we would to push on.
An hour passed and with it came the hail and even stronger storm winds that almost laid us flat. My world had been reduced to a head-torch beam, and my thoughts kept wandering someplace warm. Occasionally a little voice (probably of Greg, my producer) in my head would say ‘push record Kelvin, you need this footage’, but the camera was sodden, and refusing to power up.
I had to try hard to remind to myself why I was here.
The last rock scramble almost proved the end. We were hell-bent on tagging this peak but within metres of us a white flash, an almighty crack struck so close I felt it in my spine. We lay sprawled on the ground and there was a literal buzzing of electricity in the air around us. Everyone was ok, albeit quite literally shell shocked. We summited and got off that mountain.
The descent took longer than we thought though, and after two hours the weather hadn’t let up. It was after midnight now and temps were well below zero. We decided to take shelter. I felt lethargic, and wasn’t sure if it was fatigue or hypothermia. Ryan was shaking uncontrollably. We set about pitching our two-man tent and that’s when I discovered Ryan had decided not to pack the tent pegs. Above the howling wind, he said “they weighed too much so I left them behind”. I can’t remember if I cursed or laughed. Either way we had to find some tent peg alternatives to try anchor the fly sheet and stop the rain from flooding the tent. While Ryan clung to the madly flapping fly sheet I went in search of rocks. And I’ll be damned if I could find any rocks lying around. I ended up digging up a few with my bare hands and using them as anchors.
As I lay in the tent, huddled next to Ryan without a sleeping bag or dry clothes, I reflected, for the second time that night, on how I had got here.”

LD: You’re a talented runner yourself but completely under the radar – I’ve seen you keeping up with front runners, whilst lugging camera and lenses over the toughest terrain, at altitude, barely breaking a sweat. Tell us about the races you’ve done?
KT: Hah, the beauty about running with a camera is that when you’re tired you have a great excuse to stop – you have to take pics! Locally, I’ve done a few run races with my camera; Skyrun, Comrades, UTCT (all part of the www.backmarkersproject.com – shameless plug!), Mweni, Wildruns. But really, I’m more of an 80%’er – I prefer doing a variety of sports, rather than trying to master or be super competitive at just one. I think it’s the learner in me. Climbing is currently on the list of sports I’m diving head-long into.

LD: What has been your most memorable trail running shoot (anywhere in the world), and why?
KT: That’s a tough one. It’s hard to single these out, given that they all offer something different – the landscapes, the purpose, the people you meet and travel with. Maybe I would side with Greenland this past year, probably because it was the most recent. A team of sailors, pro runners, glaciologists and myself spent eight days exploring, by foot and boat, a slice of the remote east coast of Greenland. Our guide ran with a rifle bungeed to her run pack in case we came across any inquisitive polar bears… we didn’t see any on foot luckily. It trumped places like the Amazon River, Papua New Guinea, the Japanese Alps mostly because of its remoteness, it was true wilderness. These days, the meaning of a true wilderness seems hard to define and even harder to find.

Michel Lanne using a fast and light approach to move in the high mountains near to Aiguille du Midi, Chamonix ©Kelvin Trautman

Luke Nelson runs along Bøsdalafossur waterfalls on the Faroe Islands, an archipelago between the Norwegian Sea and the North Atlantic ©Kelvin Trautman

For more of Kelvin Trautman’s work, go to https://kelvintrautman.com/ 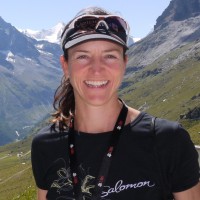 I'm an ultra trail runner by passion, and a journalist by profession - in that order of priority. I've been running for about 27 years, always with a preference for ultras. I have to admit, I was a roadie for the first 10 years, but I came to my senses in 2004, when I moved to Cape Town and found trail. And I've never looked back... Since 2008 I've been a Salomon athlete, and I remain ever-proudly Salomon.